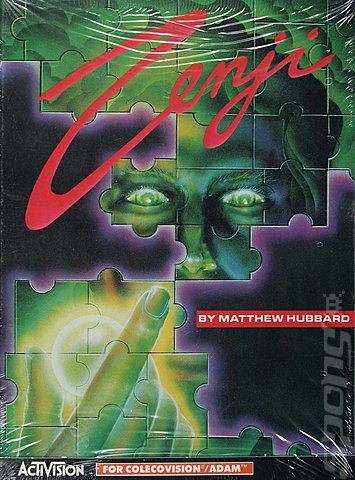 One thing I always loved about the Colecovision is how beautifully bright the colors were, compared to the Atari 2600 and Mattel’s Intellivision. I played all 3 as a kid, and always thought the CV was the best console, even though the Atari turned out to be my long-term favorite, mainly because of the quantity of titles and a quality controller. Having said that, I was playing Zenji today, a puzzle/maze game (Activision 1984) that plays/looks as well (maybe better) on the Colecovision than any other console or computer.

At first glance, Zenji seemed to be a simple ‘kiddie’ game, with easy gameplay and cutesy graphics and background music. Then as I played more, I realized it was much more than that.
The screen is filled with yellow and blue hexagons, within them are white pathways. You are a rolling white ball with a smiley face (don’t ask me why). As you roll on the paths from hex to hex, you can rotate the hexes 90 degrees at a time, turning the pathways green and eventually connecting them to make one continuous path. After completion of the pathway, you’ll move on to another level, larger with more dangerous hazards. Seems simple, as I said, but a couple of things are in your way: First is a time limit, 30 seconds for a smaller maze, up to 60 for a full-screen…..that is not a hell of a lot of time to connect 42 (6×7) of these things! 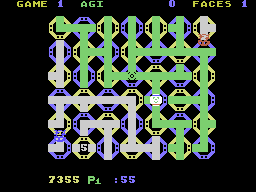 Secondly, roaming fire (think Donkey Kong) will try to kill you. Just when you think you can outsmart them by rotating out of their way, blue fire will appear and start shooting at you! What kind of kid’s game is this?!?
The gameplay is fast, addicting, and will challenge your reflexes and brain……because I think the pieces will only fit one way.
You score as you connect the pieces, and whatever time is left after level completion. High scores are kept (Yay!).

[youtube]http://www.youtube.com/watch?v=C8uGGs2ZKxc[/youtube]
I’ve always been a fan of this genre, and I easily think this is one of the better games I have ever played. It’s much more than just connecting pipes, a game I’ve seen done a million times. Frankly, any time I have the chance to play the Colecovision without using that damned keypad, I take it. Zenji is a must-own for the console.