In commemoration to my return to playing the good old never ending confusing Yu-Gi-Oh! trading card game, I decided to dig this game up and talk a bit about it. This game is one of the first to be released here in the states when the crazy Yu-Gi-Oh! trend took off. Believe it or not, I though that the rules of this game were also the same rules for the trading card game and I was real wrong. It was funny to play this game for a while and then pick up a deck and play with those rules. It did made things interesting but I guess there was some satisfaction in summoning a Blue Eyes White Dragon with no sacrifices needed. Also, the rule of having five cards at all times in your hand made the game very interesting to play but uneven in many ways. 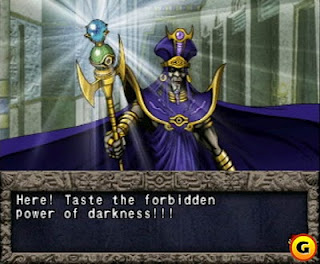 But enough about old embarrassing memories, the game itself does play in very confusing fashion and it’s nowhere similar to the card game so for those of you who know how to play the card game, forget those rules and listen to this. Each monster contains elements which you can combine to give you advantage over other monsters. It’s like when a type of monster is stronger than the other one like in Pokemon. You have to fuse your cards together to obtain stronger monsters. You can also use magic cards and trap cards. The rules on this game though only lets you use one card from your hand per turn. That means you can either fuse a bunch of monsters together or use a magic card, or set a trap card. This gives you a lot of headaches especially when you don’t know what the effects of some cards are. Believe me, you’ll be as clueless as I am.

To conclude, the game is not that long and it’ll only take you a short time to master these rules and gather the cards you need to create a real strong deck to defeat the pharaoh. You can also add cards from your deck(From the real early sets) To the game and use them in your duels for a great advantage. I suggest getting a Blue Eyes White Dragon in there. Make sure you duel with style because your duels will be measured according to how good you dueled. Overall, this is a very interesting game to pick up for the trading card aficionado, and one for those who don’t care about the card game at all because believe it or not, you don’t need to know the rules to play this game. Until next week!