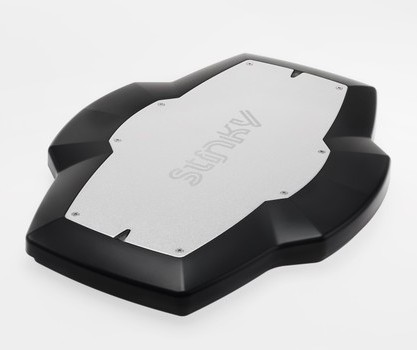 The days of video games that can be controlled with a joystick and two buttons are long past. Today’s hits seem to require more fingers than a human being has, especially on the PC.

Enter the Stinky Footboard from SteLuLu Technologies. This PC-based controller is plastic and metal pad that allows users to use their foot to control up to four different key functions. The keys can be custom mapped to any function.

Installation of the device is a snap and the customization software is easy to use. Users can be up and running, perhaps quite literally, in no time.

The controller itself takes a little getting used to, as reacting to on-screen action with a foot isn’t exactly typical on many games. A set of springs with different tensions were included along with a tool to quickly swap them, giving users of the product the ability to find a comfortable level of tension.

For first-person shooters, the Stinky Footboard proved to be a godsend. It was no longer required to remove fingers from important buttons to perform other on-screen actions, as those buttons could be replaced by functions on the Stinky.

To add a different element to the mix, a some old school titles were used for this review. The classic Pac-Manproved too challenging using the footboard, but it turned out to be quite fun to try the iconic Space Invaders with the unique controls.

The Stinky Footboard can also be used for non-gaming functions, including surfing websites.

The product itself is quite sturdy. A video shown at PAX East showed the Stinky Footboard being run over by a car and continuing to work with only minor case scratches. While that extreme was not used for this review, the product managed to survive hours of use by a 245-pound former pro wrestler without any loss of functionality. It continued to work like new, which is more than can be said about almost any other controller product.

In addition to gaming and work functions, the Stinky Footboard could be used as a solution for those with disabilities or injuries.

Overall, the Stinky Footboard is a sturdy solution to multi-tasking gameplay. Once a player gets used to it, they should find the extra functionality allows for a smoother experience while the product itself can truly take a beating.

More can be learned about the Stinky Footboard at www.StinkyBoard.com. They are also in the final days of a Kickstarter campaign with can be viewed here.