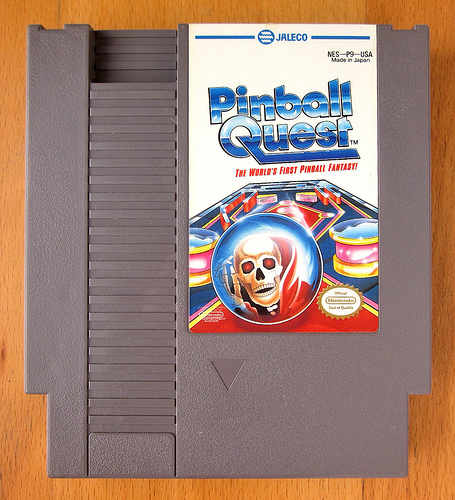 Pinball has always been a thrilling experience wrapped in a simple concept. Hit everything you can and don’t fall, but lets crank that concept to a new level… Battle witches, skeletons, and steal from the devil, all while racking up points that count as gold for you to buy and improve your pinballs ability to slay your enemies. Pinball Quest for the NES brings these things to the table, and introduces the only concept I’ve played of a pinball fantasy action RPG. Featuring boss battles, flipper and stopper powerups, and yes the ability to trade with or steal from the devil.

The level design in the game is creative and every level carries a different objective. As you climb your way towards the top you will find the one annoying feature of this game, as everytime you lose on a stage you will drop down to the last and be forced to fight your way back up. A concept that keeps you playing and occasionally keeps you frustrated. The game features no game over, so there is no real reason to quit. The only other problem I have with the game is that the “Devil Flippers” while having the most power, actually are not worth getting as they sometimes decide not to work. However the other powerups only get better as you level them up. This game is worth a try to almost anyone who likes to play entertaining and creative games. When you pop in this game you’ll enter the world of a simple pinball on an anything but simple quest. Give it a shot.

Derek Heinbokel was born in Owosso Michigan in 1988, and by the early 90s began playing video games on a regular basis. Growing up in the 90s the premier video game systems he owned were the Nintendo Entertainment System, and the Super Nintendo. Having played many of the current systems he still considers the NES a favorite. Some of most loved NES games in his collection include Batman, Rad Racer, Pinball Quest, Castlevania, and River City Ransom. Derek currently resides in Adrian Michigan where he continues to review and play video games of a wide variety. To him gaming is just a part of life, as it is to many.