One of my favorite board games growing up was Payday.  Not the later versions (dreck!), but the original Parker Brothers 1974 release, with the green box and little dollar signs for playing pieces, invented by Paul J. Gruen (who also invented other classic games like Bonkers!, as well as games based on TV properties, such as Battlestar Galactica, and The Six Million Dollar Man: Bionic Crisis.

The game is pretty straightforward.  The game board is in the shape of a calendar month. You roll the die and move your token throughout the month.  And just like reality, you’ve got to roll with the punches.  You get Mail – sometimes bills, sometimes junk, and – rarely! – a little bit of cash.  Every so often you get access to a Deal, some which might make you a little extra spending money, some that might make you wealthy – but the deal might go sour, too.  And all the while, you’ve got to manage your money. 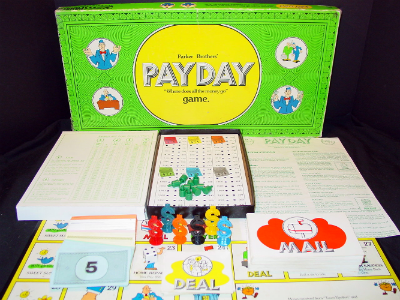 It’s a perfect game to play with teens and tweens to help them visualize a typical month of paying bills, collecting a paycheque, and trying to get ahead just a little bit more than the month before.  And it’s all done with a healthy dose of clean, family-friendly humor.  You can play it with as little as two people, and up to six, ages 8 and up.

Payday is a classic board game, and certainly one of the best.  Highly recommended!

Why everyone should have some eurogames in their tabletop collection