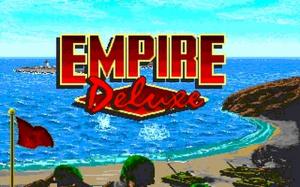 If ever there was a game that could be pointed to and accredited for the “just one more turn” phenomenon in gaming, Empire Deluxe is it.  Released in 1993 by New World Computing, Empire Deluxe was an advanced and enhanced version of Empire: Wargame of the Century, which in turn was a version of Empire, first released in 1977 and coded in FORTRAN.  The early version of Empire was crude as the platforms it ran on, but was still addictive.  The 1987 Interstel Corporation release, Empire: Wargame of the Century, had the advantage of Mark Baldwin‘s graphic user interface, making it visual appealing, which helped the game garner “Game of the Year” honors from the influential Computer Gaming Magazine.  This success helped propel Empire Deluxe‘s sales forward, having the advantage of both a built-in user base as well as being a high quality game.  In fact, Empire Deluxe sold well, and remains a favorite game for many PC gamers, earning a spot on GameSpy.com’s “Top 50 Games of All Time” list. 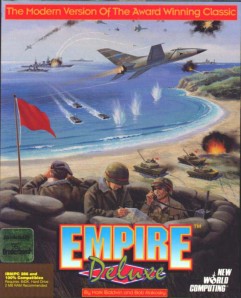 Game play of Empire Deluxe is very familiar, as it should be considering it is the great-grandaddy of the entire RTS genre.  Each player starts with one city, and needs to develop his military strength to conquer the surrounding territory.  Military units are varied, and include infantry, armor, transports, destroyers, cruisers, submarines, battleships, aircraft carriers, fighters, and bombers.  Targets have differing defensive and offensive values, and not every city is easily conquered.  (In fact, conquering cities lowers their production capacity, and if a city changes hands often, it becomes almost useless as a source of production.)  Combat is straight-forward, with the winner moving into the loser’s square upon victory.  Exploration is key, and as players start on an island, building up a naval task force (with both exploratory and combat vessels) is necessary to achieve victory. 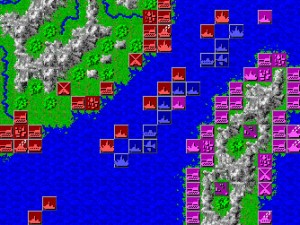 Empire Deluxe screen shotEmpire Deluxe had three modes for aspiring world conquerors: Basic, Standard, and Advanced.  The Basic Mode was set up for beginners, with limits to the number and types of units available, simple production rules, and the elimination of the “fog-of-war” obscuration of the game map.  The Standard Mode used the “fog-of-war” feature, added a few more complications to the production rules, and permitted the use of a few more military units.  The Advanced Mode unlocked all the military units (from infantry to bomber!), added rules for terrain effects on movement and combat, presented the most complications for city production, and opened the game map to its largest size (200×200). 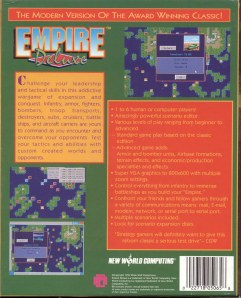 Some of the game industry’s brightest minds worked on custom maps for Empire Deluxe, including Will Wright (The Sims), Trevor Sorenson (Star Fleet), Don Gilman (Harpoon), and Noah Falstein (Indiana Jones and the Fate of Atlantis).  It seems obvious that the game’s influence throughout the industry is noticeably vast!  If you’ve never played a game of Empire Deluxe, you’re missing out on a piece of retro gaming history.  Between its history significance and the happy memories it invokes, Empire Deluxe is a true retrogaming classic!