In 1987, Konami released a video game cartridge for the 8-bit Nintendo Entertainment System (NES) console that was a port of a fairly widespread basketball simulation arcade game called Double Dribble. Could such an early-release title for the young system’s cycle actually live up to its arcade-cabinet origins? ~Eric Bailey

Double Dribble is a basketball simulation video game sporting (pun intended) five-on-five full-court gameplay. In this particular NES b-ball sim, the developers opted for the control scheme of using B to switch which defender is being controlled or to shoot on offense, while the A button steals on defense, or jumps to contest a shot if the opponent is shooting, or passes the ball. Actually, to clarify, pressing B once on offense makes the player jump, while pressing it again in mid-air releases the ball for the shot. If this is done near the rim, the game shows a dunk-animation cutscene, emphasizing the slam dunk; or, in some cases, getting “hung” when the ball clangs off the rim instead of satisfyingly tearing through the net. 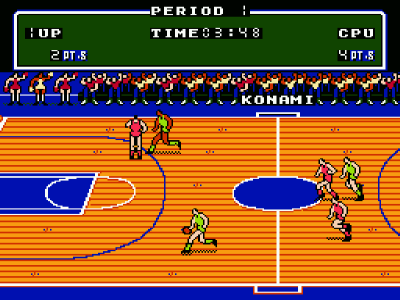 Other, the gameplay is fairly standard for an 8-bit basketball game, following four periods of play, offering a selection of a handful of cities to pick from for teams, and instituting certain penalties such as out of bounds, traveling (incurred whenever a player fails to release the ball in midair) and backcout violations, humorously called “BACK PASS” on-screen and resulting in a rapid change of possession. There is a tip-off to begin each game, but the computer always wins. Double Dribble does, though, have a few unique quirks: The players retain their momentum if they jump while running, which is already distinctive, but then the player can even change the athlete’s direction in midair. This leads to very interesting maneuvers in the paint, wherein a fairly dexterous player can change direction five or six times before the second B button tap to launch the dunk animation. It could be presumed that this is something akin to digitally throwing down a 1080-degree jam. Also, the game seems to emphasize stealing as the primary strategical element. 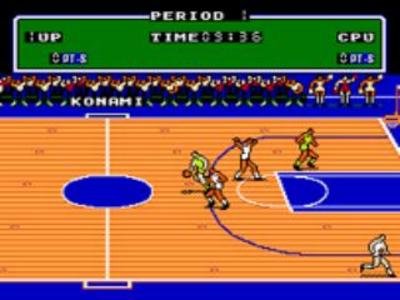 Furthermore, the A.I. moves in the weirdest, most illogical patterns – even on higher difficulty levels, one example would be when an unguarded player has a clear path to the basket, only to turn and take several step back toward the half-court line instead. Finally, one unfortunate deficit of this basketball game is the inability to pass to an on-screen teammate: The computer can pass to an off-screen teammate, but a human player must absolutely only pass to a player that is already visible on screen, lending a certain limitation to available plays.

The title screen has a voice effect for the Double Dribble name, then after the player chooses to play alone or versus a human opponent, a cutscene launches that shows people (or, at least, very fuzzily rendered pixelated massive blobs) swarming to an arena as a Konami blimp flies overhead. A shortened version of America’s national anthem plays, balloons are launched, and an absolutely enormous flag is raised over the stadium. Finally, one of the most awkward options screens in gaming history is found: Settings such as period length, team, and difficulty level can be altered, but with each button press, rather than simply and instantly scroll through the available selections, an on-screen player actually fires a jump shot at a rim that aligns with the intended option. This makes for an overly tedious selection process, which would be bearable if it were not for the already drawn-out effect of the opening ceremonies screen.

This 8-bit basketball sim looks okay. There are better-looking roundball titles, and there are worse-looking ones as well. The players do not differentiate in height; but in classic NES basketball game tradition, there are palette-swapped sprites in two varieties to display white players and black players. Gameplay follows somewhat smoothly, the one animation anomaly being a bit of flickering, even besides the intentionality of the ball-handler flickering as a possession signal. 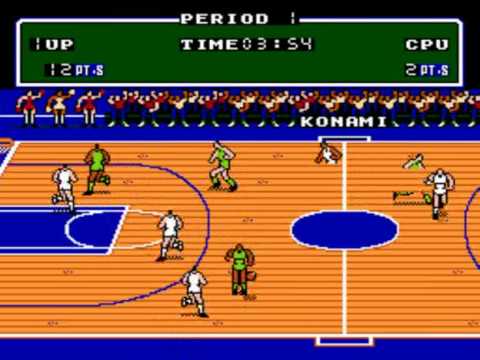 Perhaps somewhat humorously, rather than the disappearing act of typical flickering characters, the ball-handler alternates in sprite frames between being caucasian and African-American in appearance. But the visual highlight of the game are the dunking cutscenes, perhaps the best on the console, copied by later titles but never quite equaled in their five or six frames of slam-dunk monochromatic-athlete glory.

Background music is laid to the wayside in favor of traditional arena organ ditties and the constant repetition of the bouncing basketball, emphasized appropriately for a game called Double Dribble, to the unfortunately annoying result. Some digitized voice effects are used, such as for the aforementioned title screen and certain foul calls.

There is the usual “swish” sound effect for a made shot (heard often, since it seems very difficult for the computer to miss a jumper), the oomphy dunk noise, and perhaps this reviewer’s favorite, the rattling clang of a missed slam of the rim. Just as with its graphics and its gameplay, the soundtrack of this game is middling for a basketball title on the NES, though Konami does flex its muscles in a few highlight portions.

Double Dribble cannot get too much credit for creativity, since it is not only an arcade port, but also a title based on a pre-existing sport, basketball. However, Double Dribble did set the basketball video game standard on the NES, considering its early release date in the console’s supported lifespan. The gameplay is actually somewhat impressive in that context, but its most significant contribution to the genre is likely the dunking animations, which would be endlessly emulated by dozens of future basketball titles and series across further console generations, making the switch from gameplay view to a specific up-close dunking shot a staple for roundball games to come. 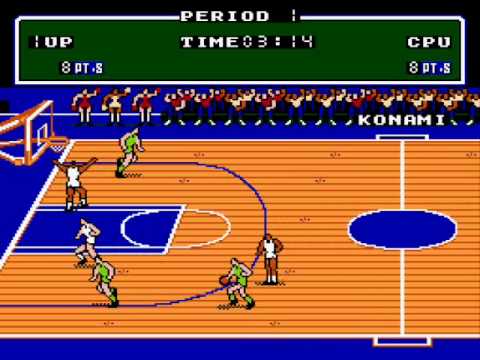 In terms of its production quality, programming accuracy, faithfulness to the original sport, and overall place in the NES library, Double Dribble is an average game. This is not a title that will appear on any all-time greatest lists, except perhaps those that allow for sentimental favorites, but nor will this appear on worst-ever lists either. It is what it is: A simplified, arcade-style basketball video game. In fact, it is actually probably a step up from the original arcade iteration, which made players actually press a button for every single dribble. Nonetheless, Double Dribble on the NES scores two and a half stars out of five.