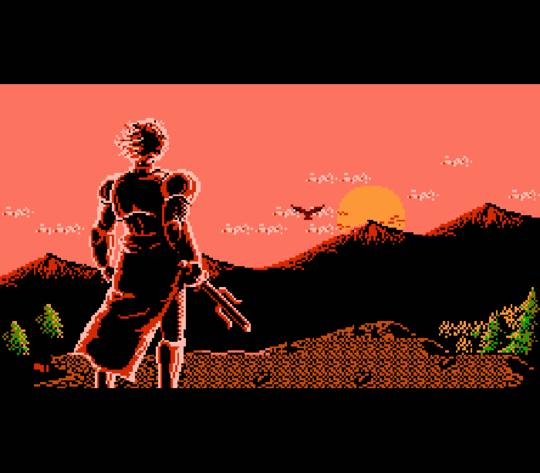 Released in 1989 by Taito, a developer perhaps best known for their arcade ports, Demon Sword was a rollicking foray into classic Japanese martial arts action for the Nintendo Entertainment System. With a mysterious warrior set against gorgeous backdrops fighting relentless horde of demon foes, this was a title that implemented some great ideas in a slick package.

Demon Sword was also remarkably similar to an earlier Taito release, The Legend of Kage, which was produced in 1986 from the arcade game of the same title. Both feature identical controls for throwing weapon, sword, and jumping, with storylines featured around lone fighters against out-of-nowhere enemies en route to boss fights and power-ups, and even the same flair for tree-jumping and background-climbing. In fact, the two games were so similar that pirate copies of Demon Sword were often re-labeled and marketed as Legend of Kage 2. It can only be assumed that Kage had such success that Taito decided to reload a the similar development engine to create Demon Sword. 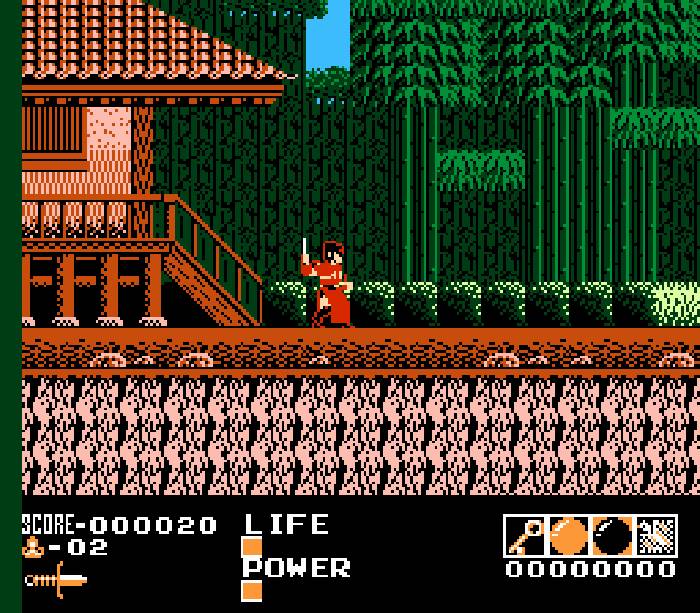 Demon Sword boasts fast-paced high-flying gameplay that feels like playing a video game version of Crouching Tiger Hidden Dragon (though, in fair credit, that film paid homage to earlier Asian epics). Some may say that giving Demon Sword four stars out of five is awfully high for a cartridge clone of a game that was already an arcade retread, has sub-par presentation, holds limited depth, and offers a quirky difficulty level, but Demon Sword passes the fun test and gives us a game that is truly wondrous the first time you pick it up. If you have not tried it in a while, fire it up again, and remember how awesome it felt the first time you realized you could leap an entire screen upward and from treetop to treetop in one jump. 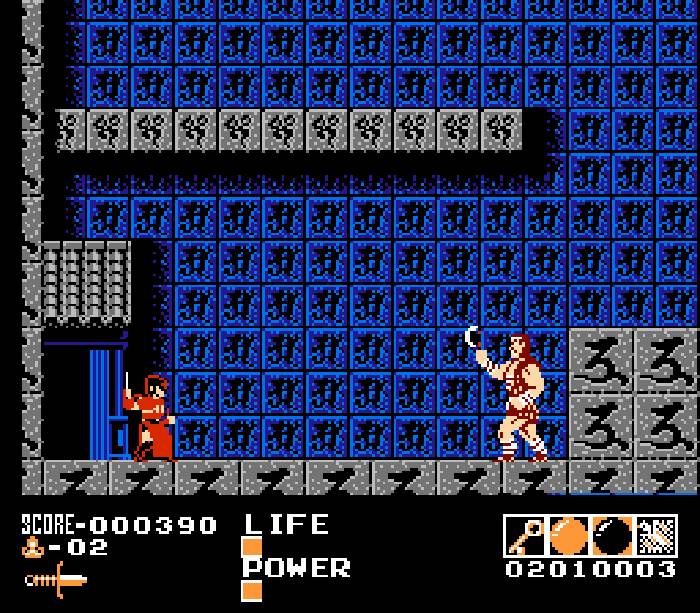 The player controls the hero Victar, who wields an old weapon, the titular “Demon Sword,” with which to battle the malevolent forces of the generically named Dark Fiend. Battling across three worlds of two levels each before the final world stage, this game utilizes the somewhat distinctive control scheme of having the up button on the directional pad jump, while the A button is a sword slash and the B button throws a dart. Whereas dozens of other platforms would harbor one button for jumping and one for attacking, Demon Sword instantly offered two buttons for attacking. This delivers wonderfully combative gameplay, and rather than marginalize the jump feature, it is quite

the leap, as the character seamlessly glides across the screen at superhuman speeds and heights. In addition to using the Select button as activation for spells that get collected, it is truly remarkable that so few NES title used a similar control scheme, when this one so clearly works to enormous enjoyment.

This can be a difficult game to master, especially some of the boss fights, but once you get the hang of the patterns of the infinitely generated hordes of enemies, it becomes a fun little romp. Victar can collect different power-ups; some that increase his life or respawn, others that change his speed or the speed of his darts, one that shortly allows him to throw darts in four different directions at one time, and keys that open special areas that reward miniboss-beatdowns with devastating special spells. 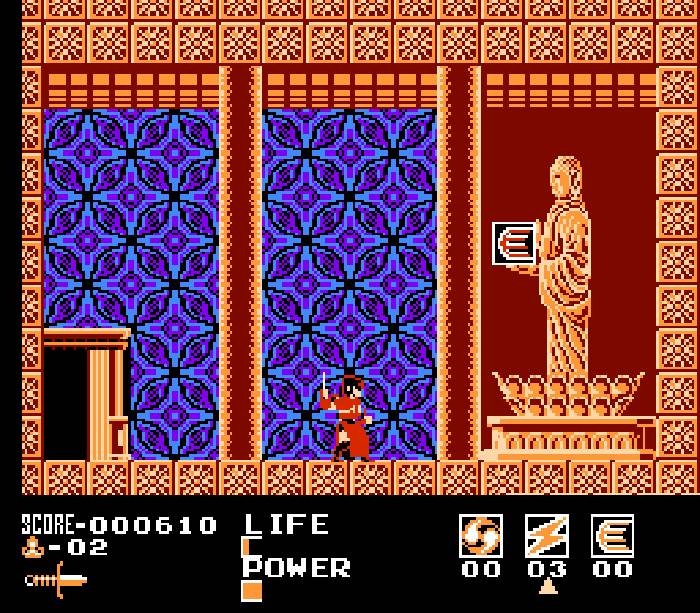 Demon Sword is one NES game that defies description: It is simply difficult to portray, in words, the b.a. awesomeness of being aiming to slash a sword, throw a dart in eight different directions, and jump like only a handful of other characters have ever jumped before, all while casting spells and collecting power-ups to defeat the relentless demon horde. It may not be for everyone, but this game is to arcade-style platformers what Guerilla War is to overhead shooters: A well-honed near-perfection that learned its lessons from previous, similar titles. 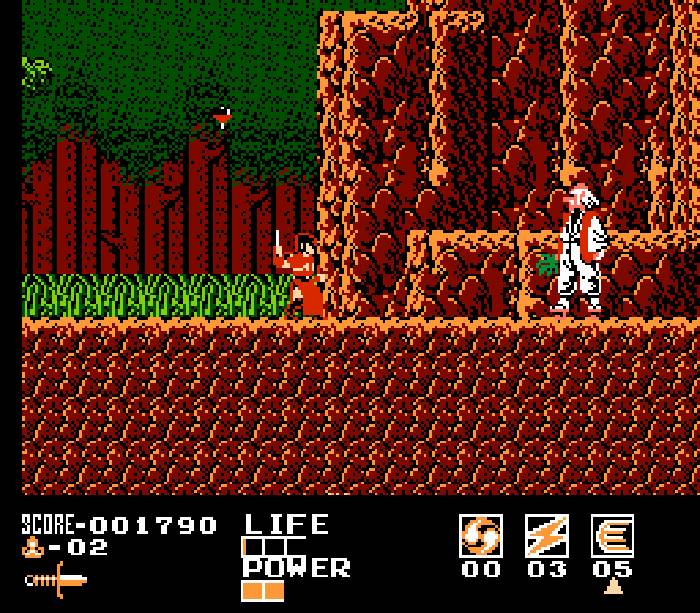 The looks of the Demon Sword game are a step up from Legend of Kage, and intriguingly stylized, with colored outlines on the characters for example. Some of the background elements are perhaps too obviously tiled, almost to a distracting extent, but they are certainly colorful. Games like Ninja Gaiden boasted better and more dynamic level designs; however, Demon Sword definitely delivers in the “wow this game plays really fast and fluid without many flickering or sprite problems” department. A slick, somewhat-polished experience. 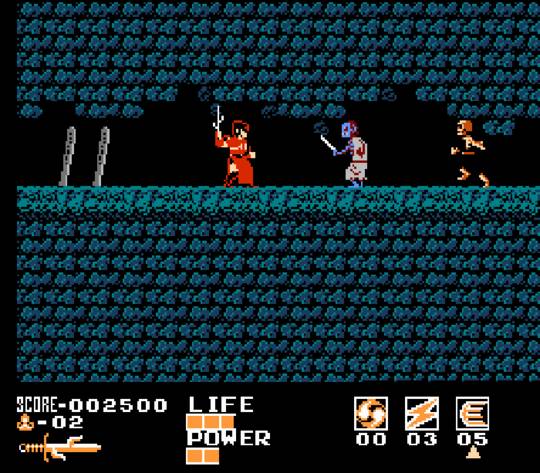 The musical accompaniment is nothing legendary, but provides an appropriately up-tempo beat for the levels, perfectly complementing the face-paced action. Otherwise, the music here is standard: The boss tracks sound like boss tracks, etc. The effects are simple, not understated or overwrought, and are standard without complaint with one exception: The sword-slash effect is very metallic, and sounds like contact is made even when you are swinging at air. You get used to it, but until then, it can give a moment or two of cofusion. 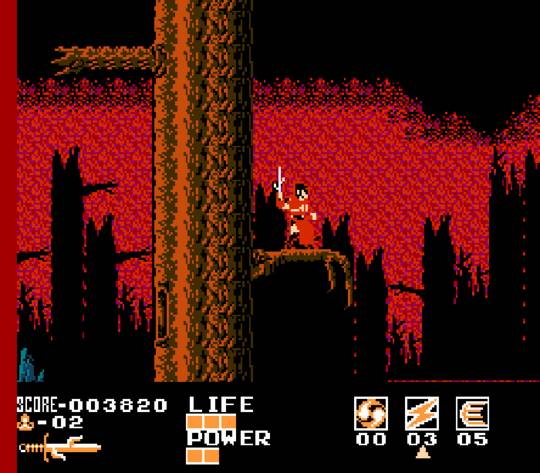 The control scheme for Demon Sword was masterful, seeming to provide an additional layer of gameplay that other NES titles could not offer. It may have been adopted from Legend of Kage, along with other elements, but no matter where it comes from, that control scheme should be lauded somehow, with the up button failing to catch on as a jump effect until the practice became nearly universal in the fighting game genre. Otherwise, the power-up system is well-done, if not completely 100% innovative; it is fun to know that some power-ups are immediate, while the magic spells must be earned in secreted areas and have limited use. The enemy designs are noteworthy as well, especially the bosses (one difficult-to-forget example: the old man boss on 1-2 that lobs overpowered bombs at you).

Demon Sword has its flaws: Quick play-through, learning curve difficulty, a hit detection radius that takes some getting used to, perhaps a penalty for following in Legend of Kage’s footsteps almost too literally, and a lack of polish in its audiovisuals. However, for taking the proven formula of the Kage game and refining it to provide one of the best, most intense martials-arts epic experiences on the Nintendo Entertainment System, Demon Sword throws four stars out of five.

King of Kings: The Early Years