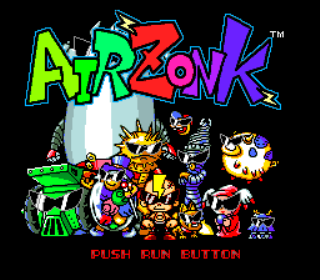 As the era of the game mascot came to pass the PC Engine was at its peak, so it’s no surprise to find that it was the recipient of its own platform hero in PC Kid (or Bonk, as he was known in the US). He was an amusing character, and the star of some outstanding games, but apparently Hudson decided he had uses beyond that genre. But how do you adapt a prehistoric platform game starring a caveboy into a shoot ’em up? Well that’s easy – make him a cyborg! Whilst probably a cynical ploy to make PC Kid ‘cooler’ in the wake of Sonic’s rise to fame, it also facilitated a shmup with great potential. The primary antagonist here remains the same as in the PC Kid games – King Drool. This time he has sent forth legions of maniacal robots to take over the world. Having discovered his plan, Zonk and the rest of ‘Team Cool’ set out to stop him at any cost! 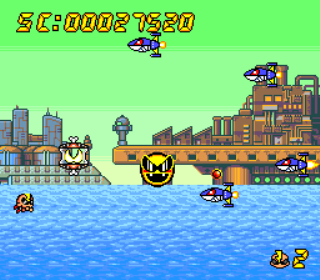 Before beginning play you must choose one of the three originally monikered difficulty levels – Sweet, Spicy, and Bitter. The most immediately noticeable difference between them is the number of lives you start with (on ‘Bitter’ mode you start with one, for example!). You must then also choose a ‘Friend’, but more on them later. Once that’s out of the way, you’re off! As you’ve probably guessed, you play through Air Zonk as the titular cyborg himself whose many talents apparently include the power of flight. Using this helpful ability, he must progress through the five horizontally-scrolling stages, taking out King Drool’s robotic minions as he goes, which range from the formidable to the truly bizarre! The stages they populate are almost as varied too and include Toxy Land, Cyber City, Rockin Stadium, Deep Blue, and Land of Drool. 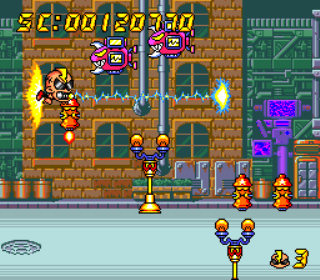 Considering it’s a shmup derived from a series of platform games, it should come as little surprise to find that Air Zonk has its fair share of original features. Among these are Zonk’s rather odd ‘friends’. There are ten of them and you get the option of choosing one of them before you start, or alternatively you can opt for the ‘auto’ option that lets the computer choose for you. During play, you’ll occasionally encounter small yellow smiley faces which appear when some enemies are destroyed. These are merely worth a thousand bonus points each, but collecting five of them within a certain amount of time results in a larger smiley face appearing (wearing shades of course – nearly everything in this game has to be wearing shades or it wouldn’t be ‘cool’). If you collect it, your chosen ‘friend’ will appear and fight beside you! They act much like the ‘options’ from Gradius – i.e. they follow you around the screen and fire their own weapons. The best part, however, is if you collect a large yellow face whilst already accompanied by a friend, Zonk and said friend will merge and, for a short time, form an indestructible hybrid creature/device with much fiercer firepower! 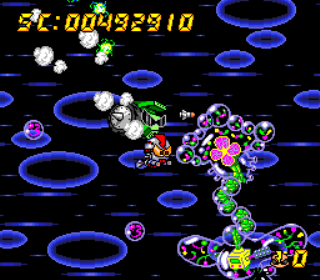 In addition to the highly helpful ‘friends’, there are eight, somewhat unorthodox projectile weapons available for Zonk to use. These include homing missiles, a short range but powerful electric beam, flying metal jaw things, spinning boomerang things, eight-way lightning shot, flying boxing gloves, explosive playing cards, and something that shrinks Zonk down into a smaller form who can fire a multi-direction homing shot. On all but the ‘Bitter’ difficulty mode, Zonk also has the ability to cause significant damage to any enemies close behind him by using an after burner of some sort. It’s extremely short-range but is a big help in certain situations. On top of that, Zonk has the ability to fire an R-Type style charge shot. If the button is held down long enough, a smart bomb will drop onto the screen and take out all non-boss enemies too. 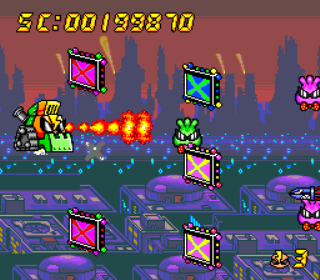 The attempt here to make PC Kid/Bonk ‘cooler’ is about as subtle as a sledgehammer but, whilst a little reminiscent of some other strange/cute shmups like Konami’s Parodius and Sega’s Fantasy Zone, it’s still pretty amazing what Hudson have achieved with Air Zonk. Purely from a technical standpoint, this could well be the finest game on the PC Engine! The backgrounds are varied and detailed, and some stages have more than one, but it’s the sprites that impress the most. There are a huge number of different enemies which are colourful and full of character, and many of them are pretty big too, particularly the bosses! Talking of whom, I’ve seldom seen such a peculiar bunch of bosses. They range from mechanical dinosaurs that split in two, heaps of rubbish, and even a giant amoeba type thing! The trusty Engine must be working its socks off to keep it all running smoothly but from the outside it seems to handle it all with no trouble at all! Zonk himself looks suitably ‘cool’, as do his ‘friends’, and their weapons are both original and satisfying to decimate the beautifully drawn enemies with. 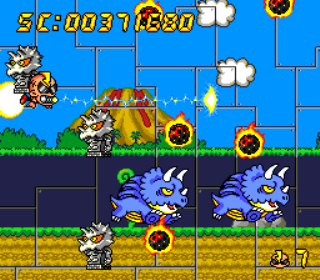 The technical splendour isn’t just restricted to the graphics either. Each stage has its own memorable tune and the effects are loud and varied. This remains almost certainly my favourite soundtrack on the system and it makes great use of the Engine’s sound chip too. I particularly like the music for stage two! The game understandably takes a lot of inspiration from the PC Kid games, such as stage and enemy design, and they have been incorporated excellently – just look at the screenshot to the right! Everything about Air Zonk is of a very high quality and it’s sometimes hard to believe it’s all just on one standard Hu-Card! However, extraordinary technical achievements are all very well, but what if the game played like a football match between two teams of fifty retards? It would be entertaining to watch but somewhat frustrating to take part in, right? Well, happily that’s not the case! 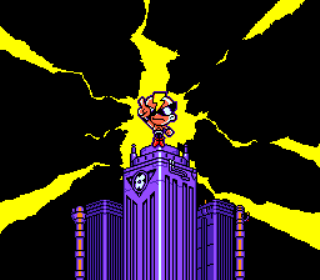 Air Zonk is enormous fun to play through – there’s never a dull moment with the game always providing something weird or interesting to see, including some very creative enemies such as robots with magnets on their heads, which draw Zonk closer to them! The collision detection is good here, and fair too – if Zonk only receives a glancing blow then he’ll merely lose the weapon he was using instead of dying, but even when you do lose a life you don’t have to restart the level, and the power-ups are encountered frequently. It’s not a perfect game – the weapons aren’t particularly spectacular and there’s not much ‘explosiveness’ about the proceedings, but I suppose it’s not really that kind of game. There’s no major problems with the game though, with the only real issue being that it’s all over a bit too soon – there are only five stages and some of them are pretty easy so it probably won’t last you too long, but it’s a hell of a game while it lasts. It’s original, and full of character and, unless you object to the cute, colourful graphical style, this must surely rank among the best, not to mention most unique of the crowded Engine shmup milieu.

Retro King Simon is a 36 year old guy from England, and likes lots of stuff, including retro videogames, movies, and anime. You can check out his blog here – Red Parsley.