If you’ve read other reviews or talked to folks who have played Homefront, no doubt you’ve heard it described as “a worse version of Call of Duty.” This is accurate in some respects: it’s not, overall, quite as tightly executed and the range of available weapons is smaller. ~Seth Rosen

Homefront packs a punch, and it doesn’t wait for the first bell to ring before socking you hard, right in the belly. The game starts with the player being abducted and put on a bus to Somewhere Bad. I sit on the bus for a few minutes, peering out the windows, unable to move or twist around to get a better view of the proceedings of a depressed suburban Colorado town. At first, the restriction on my view bothered me, but then I realized that it had to be this way: the Korean People’s Army (KPA) guards wouldn’t take too kindly to me jumping around the bus, repeatedly ducking and standing back up on top of the seats (which is exactly what I did on the trains in Half-Life and Half-Life 2). So, I settled in, ready to play their way. Soon I saw that “their way” really delivers on the game’s tagline: “Home is where the war is.” The bus trundles through the town and I see several limp bodies, their heads covered in blood-spattered sacks, strewn across the sidewalk. I see people desperately pleading for mercy. I see parents gunned down in front of their wailing child. Truly a horrible and disturbing scene. What’s more, given Unified Korea’s rise to power as laid out by the game’s alternate history in the introduction, it doesn’t seem that far-fetched. 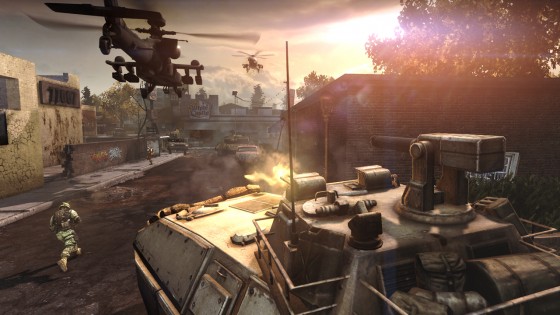 Though Homefront is not really an adaptation to the interactive medium of writer John Milius’ previous work (Apocalypse Now, Red Dawn), you can see their ehem influence throughout the game’s story and setting. The world is intricately and brutally realized and I was itching to join the fight. In short order, my bus was rammed by a Resistance cell in order to secure me, the all-important pilot, for their mission. Unfortunately, the the game’s mechanics immediately got in my way. I was hot-blooded and ready for the warpath, but I had to wait for my savior to finish what he was saying before the game prompted me to press ‘E’ to climb out of the bus, rather than let me duck and crawl out on my own when I wanted to, which would have been immediately. It was primarily little things like this that prevented me from fully engaging with my tasks at hand and immersing myself in the world. All-too-often, I would end up waiting for the game to catch up to me (sometimes dialog and sometimes the actual characters) before I could proceed, despite the fact that I was the slowest runner in the entire resistance force. I would get frustrated watching my comrades press their bodies against cover and lean out, while I was stuck with standing, crouching and going prone. Summed together, these small annoyances would periodically break my immersion. 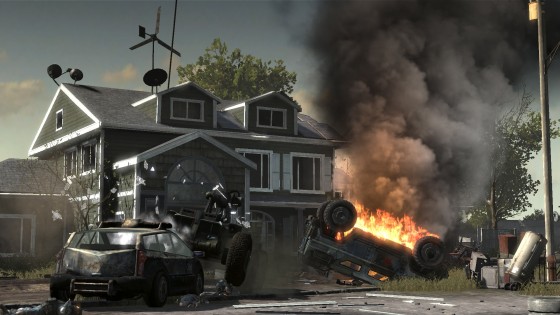 These complaints are valid, but plenty of excellent games came before Homefront, overcoming somewhat clunky controls, so I didn’t want to abandon it. And I didn’t have to stick with it for very long: I finished the single player campaign on Hard in about 5 hours. Though the recent trend of military shooters sporting such short single player components is a disappointing one, it sort of worked in Homefront’s favor. Over the course of the entire game, though your path is oft waylaid, your mission is relatively small in scope: escape the bus rescue, commandeer a few fuel trucks, drive them to San Francisco and then lase a target on the Golden Gate bridge for the newly-fueled air support to bomb the ever-living shit out of.

On that note, Homefront rarely lets you lead the charge, resulting in a genuine sense that you’re just another foot soldier, though there are some set-pieces that you have to take down in order to advance.  Your comrades do a good bit of killing themselves and some of their dialog excellently portrayed the atmosphere of the resistance and their venomous hate of the KPA. You’ll also find old newspapers scattered throughout the game that relate more background of how the U.S. got to be in such a dire position. Interesting stuff that helps build the world, but the interface for the blurbs felt more like a game menu than a newspaper in your hand. 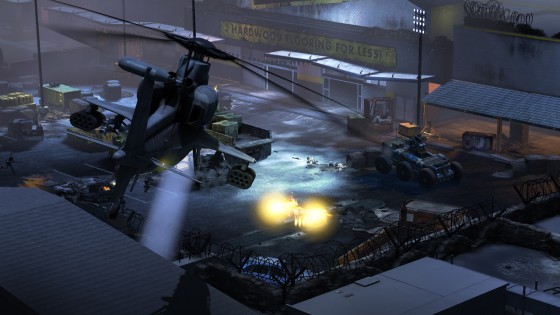 When it came to handling the futuristic high-tech weapons, it seemed like an order had come down from on-high that you were the only resistance fighter capable of wielding the blasted things. This was to the detriment of the fun and believability of the game. For one, you had a tech-wiz with you for at least half of the game who I’m sure was capable of using the weaponry. Second, the technology behind the Gladiator (a vehicle that riddles with holes any enemy you can look at for a full second) just doesn’t seem to fit with the grittiness of the rest of the world. Lastly, the Gladiator targeter simply wasn’t very satisfying to use. I found it significantly less fun to pop out from cover and target the next KPA soldier and have a vehicle drive over to him and unload a machine gun in his face when compared to the visceral experience of creeping around the suburban yards and through the White Castle, shooting baddies as you went. 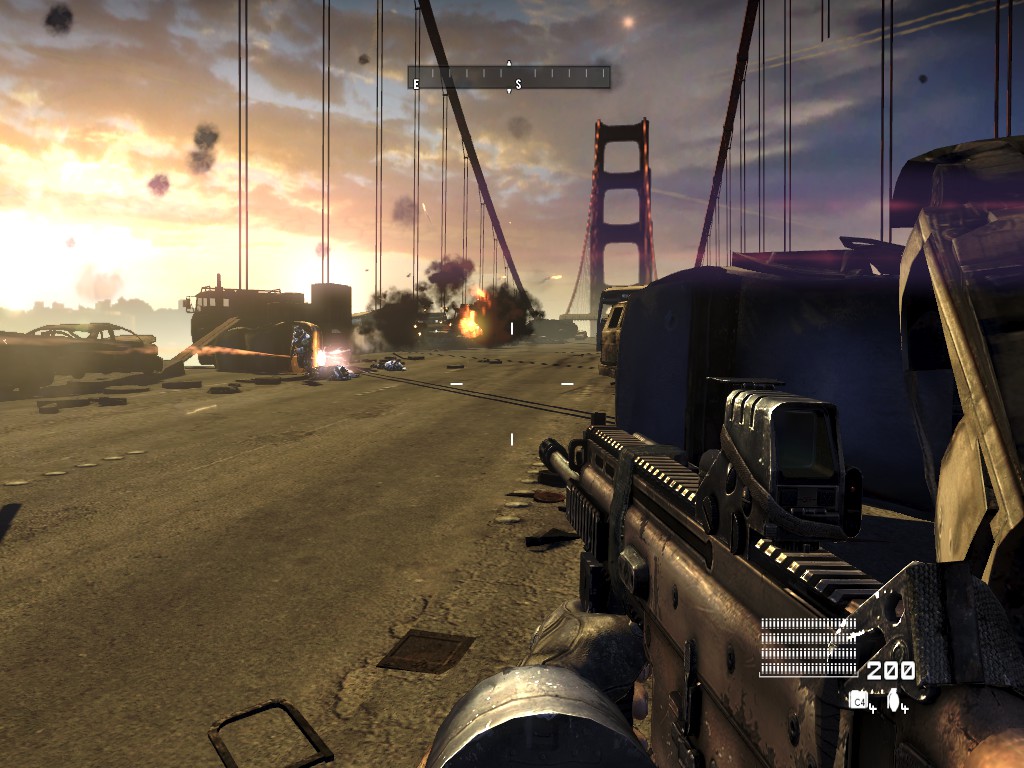 Similar to this imbalance of how enjoyable the different weapons were to use, Homefront suffered from some uneven pacing. In particular, I found the levels taking place in and around the countryside to be a bit slower. It didn’t help that the vehicle sections were significantly easier than the ground-fighting (which, inexplicably, was suddenly against extremist American conspiracy theorists). I found a few spots to be massively more difficult. Some of these sections I died and reloaded at the last checkpoint 10-20 times. There was, however, one moment that I really enjoyed in the country level: our small force was attempting to cross the camp of the extremists undetected and we came upon a pair of hooligans that were torturing a KPA soldier, shooting at his feet to make him dance. I saw this and I was disgusted. Without considering my actions, I walked up behind one of the men and sank my knife into his back. The mission was failed (I guess the other guy standing there noticed his buddy getting shanked), but I felt vindicated. For me, Homefront was about doing what needed to be done to get our land back, not about acting maliciously towards the  invaders. 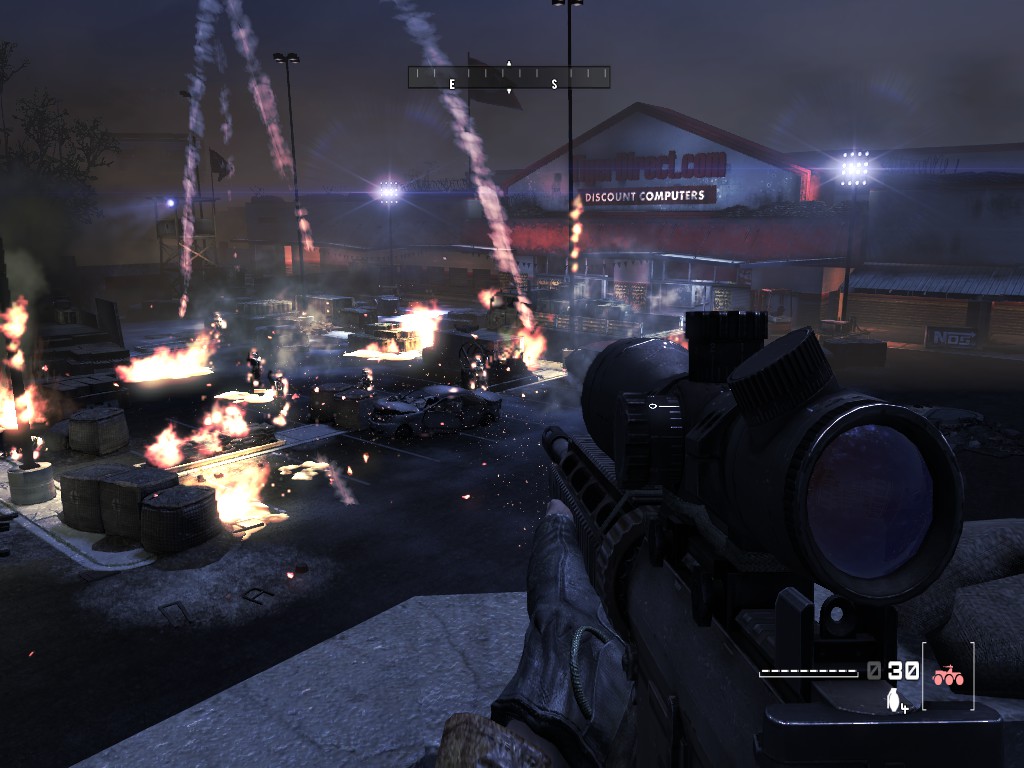 To that end, it’s in the first few and final levels (out of 7) that Homefront truly shines. These are the levels that take place in the remnants of civilization and you find yourself battling across yards, sneaking through gaps in broken fences, and dashing through a burning computer parts store next to a Hooters. You see what this war has done to our homeland and you are compelled to right the situation. It truly feels like you’re fighting to get America back to its rightful owners when you’re running from abandoned car to abandoned car on the Golden Gate Bridge, getting into a position where you can call in air support and kickstart the rebellion.

While the game’s environments were very rich, its graphical fidelity wasn’t top notch. The music, on the other hand, was spectacularly done and very effectively instilled in me a sense of patriotism. I played Homefront on the PC and I am forced to wonder whether the fact that Kaos Studios outsourced the PC development toDigital Extremes impacted the quality of the port. 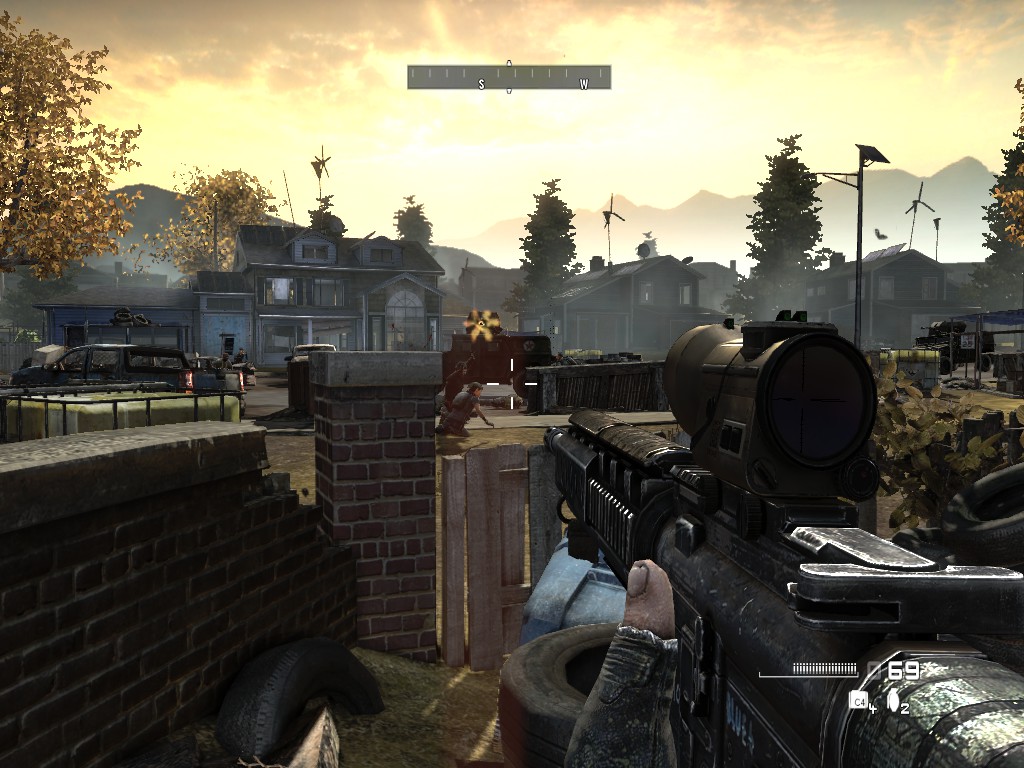 If you’ve read other reviews or talked to folks who have played Homefront, no doubt you’ve heard it described as “a worse version of Call of Duty.” This is accurate in some respects: it’s not, overall, quite as tightly executed and the range of available weapons is smaller. As for the multiplayer, which I played briefly, it is more or less what you should expect from a military shooter: realistic weapons and environments with unlockable content based on your performance. The maps seemed to differ wildly in quality, with the better ones tending to be smaller, more tactical suburban environments and the worse ones being large, open country settings that beg for snipers. Homefront’s multiplayer does feature some ground and air vehicles, which mixes up the gameplay a bit. As far as I’m concerned, there are two interesting aspects of the multiplayer. The first is small deployable bots (also ground and air) that players can pilot remotely. The second is Homefront’s capture point game mode, which has a tug-of-war dynamic: only 3 points active at any time and in order to access and capture the points beyond those, one team had to control that section of the map. 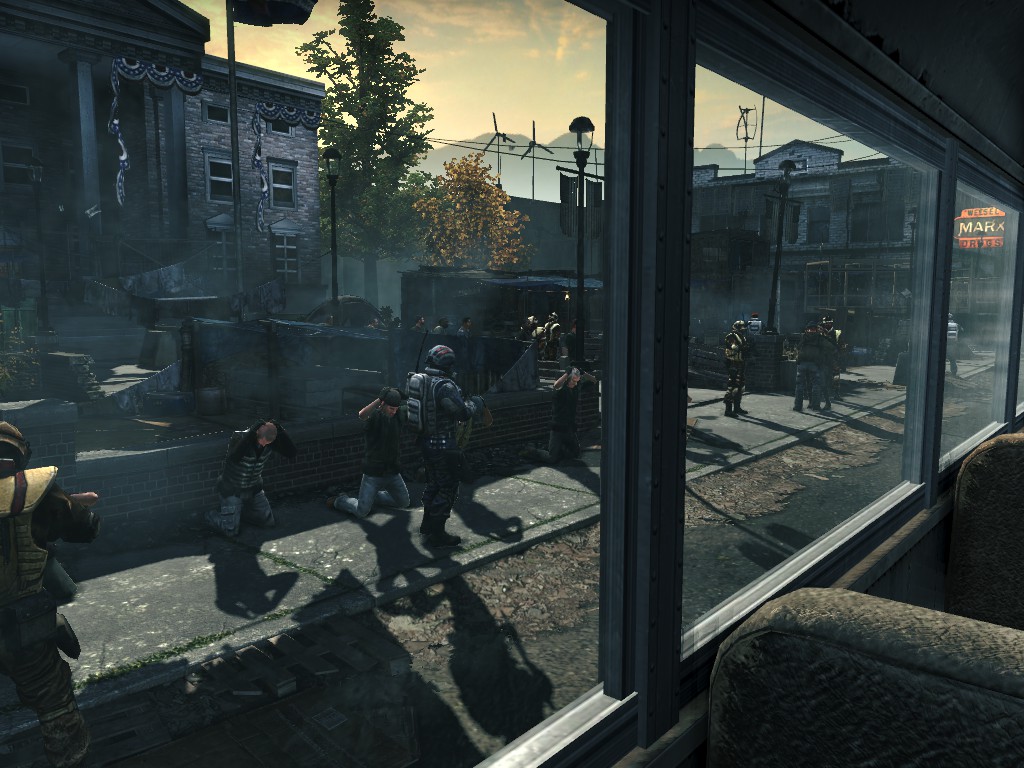 Yes, Homefront is, on some level a worse Call of Duty. Honestly, though, how different can military shooters truly be? I say, “so be it, judge the game on its own merits.” Homefront, unlike a certain other recent release, had a somewhat humbler goal in mind than to be the next Call of Duty: tell a compelling story in a rich and emotionally-charged environment where the player is not playing the hero at every turn. Though it wasn’t stellar all the way through, I think it succeeded in that respect.
Should you play it? If you’re interested in emancipating the United States of America from the control of United Korea, hell yes. If you’re a Communist and just want to shoot more dudes so you can rank up and get a new scope, don’t bother. Seriously, Homefront is not one of the best executed interactive experiences I’ve ever had, but if you were at all interested in playing the game just based on the premise, I’d say go for it.

The Wolf Among Us