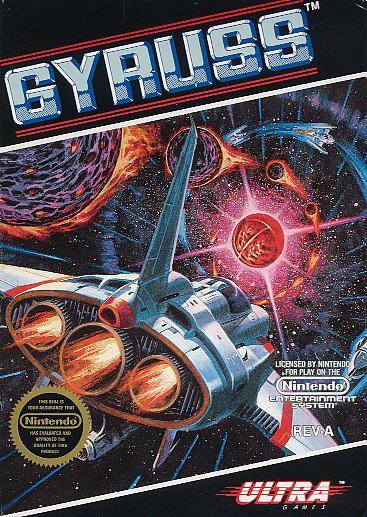 In early 1989, Konami released an 8-bit video game cartridge for the Nintendo Entertainment System console under their Ultra Games label that would prove to a singularity among the typical shoot-’em-up choices available to a player: Gyruss. 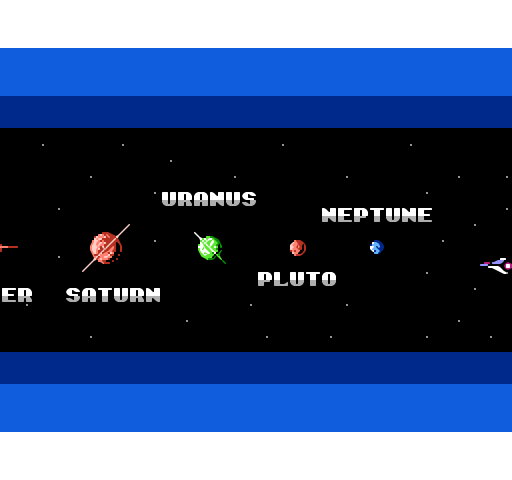 Gyruss is a one-player game. Although it exists within the shooter genre, it neither scrolls horizontally nor vertically; instead, this is a “tube shooter,” somewhat like the classic title Tempest, with a fixed viewpoint that provides a faux three-dimensional feel. The player controls the ship by rotating it around a ring formation, always facing the center. Enemy ships not only move around in circles also, but also at different depths, sometimes as far out as the player-ship, while other times so far away they appear as just a couple pixels in the center of the screen.

There are two control modes offered, A and B. Control Mode A ensure that pressing Right on the directional pad always moves the ship to the right, no matter which vertical half of the screen the ship is on. In other words, if the ship is at the bottom center of the screen, and the player presses Right until the ship is fixated at the three o’clock position at the right center of the screen, the ship will stop there, at which point the player must start pressing Left to continue the ship’s movement rotation around the screen. While it is nice that the game provides a steering mode that prevents the cognitive dissonance of a D-Pad direction only being “correct” half the time, the effect of each pause halfway up the circle is jarring, and Control Mode B is preferred, in which a continual, smooth motion of the ship is achieved, and pressing a direction on the D-Pad will always go clockwise if pressing Left and counter-clockwise if pressing Right.

Of course, there is much more to this video game than simply providing the tube shooter experience, though it is significantly notable for that accolade, considering it is the only example of such a game for the NES. The loose plot, explained in a single frame if allowed past the title screen, only says “Mankind must rid the universe of evil. It’s a death defying risk, and only a hero can succeed.” A foreboding, humanoid figure appears in the background against the starfield as a backdrop to this ominous text. 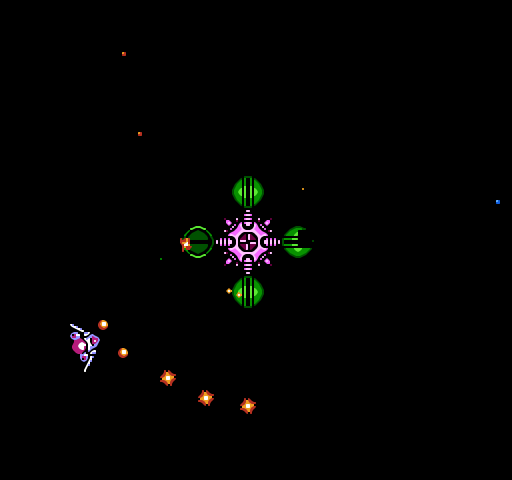 Play proceeds throughout the solar system that human beings are familiar with. Beginning with Neptune, and proceeding through each of the other planets (even Pluto, which must be during a portion of its orbit that takes it inside Neptune’s), the player is aiming to arrive at the Sun for the final showdown. Each planet has a few fairly short levels, that conclude with a boss fight, and then a bonus stage afterward for points.

In order to defeat each “warp” or wave of enemies, the B button fires the blaster cannon, with a maximum of two shots on the screen at a time. Earning a weapons upgrade enables double-fire, which is obviously a great boon to success, and can be achieved by blasting the two side barriers off a bonus orb before hitting the orb directly. The A button fires a special weapon, of which the player only has a limited amount and most slowly earn more throughout the game. This blast plows through everything in front of the player, towards the middle of the screen, and includes eliminating certain objects and projectiles that the normal blaster cannot get rid off. 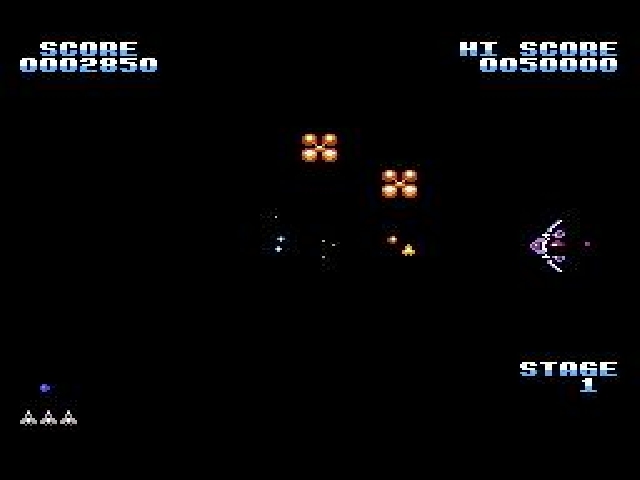 The majority of the obstacles to victory consist of groupings of enemies that fly in, dance around in some form of pattern, then make their way to the middle of the screen. Much like Galaga, a handful of groupings will all form together, and should be dealt with before they begin coming back and dive-bombing toward the player. In fact, similar to other shooters such as even Sky Shark, shooting down all the crafts in a particular squadron before they reach the middle garners bonus points.

Besides the alien spacecraft are other challenging deterrents to deal with, such as asteroids and solar fireballs to dodge, along with the lasers and other weapons fired by various enemies. Some weaponry utilized, like the homing solar flare fireballs used near the end of the game, actually slightly veer toward the player as they come from the center of the screen, placing an enhanced demand on reflexes and reaction time. 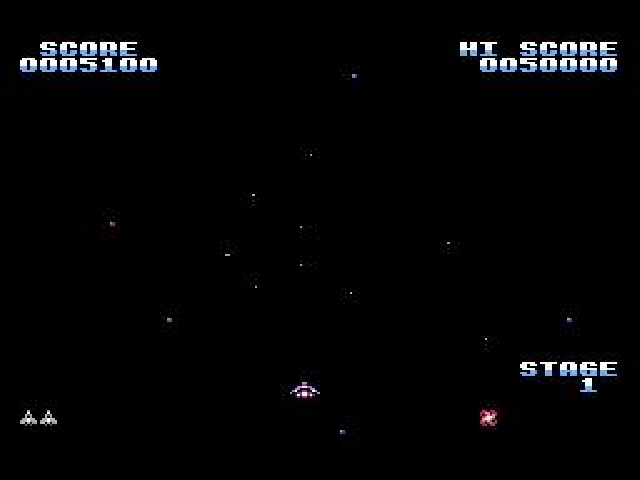 There are about forty levels in all, with a brief ending afterward before a “second quest” begins. The Konami code is intact, if the player wishes to begin with 30 lives, instead of the usual three extra. Thanks to the deft programming skills of the development staff at Konami, Gyruss proves to be a slick, fun, very enjoyable 8-bit video game. As a shooter, it is a very distinctive title, and although not as tortuously difficult as some, with or without proper endings, still offers a worthy playthrough for shmup fans. That being said, this is not a game for everyone: It is so different that many will balk at its strangeness and simply never quite “get it.” Gamers have tastes, and some may fall in love with this selection. 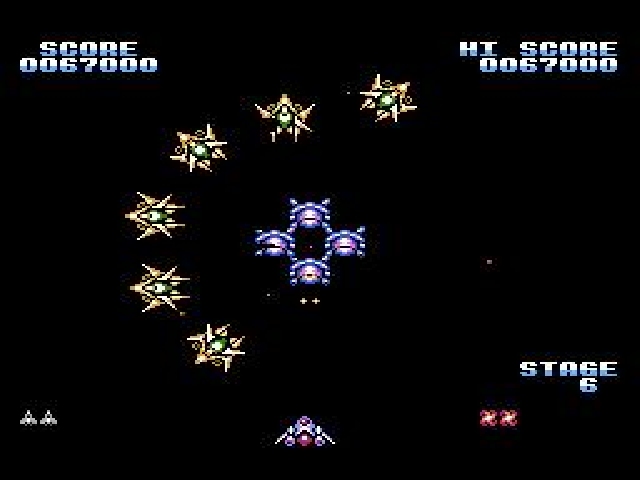 Gyruss is a good-lookin’ little vidya game. The action is frenetic and fast-paced, complete with Konami’s signature visuals, even down to the small yellow-and-orange circular-oriented explosions that can be seen elsewhere in such NES cartridges as Teenage Mutant Ninja Turtles II: The Arcade Game. Solid ship designs and fancy beam weapon visuals aside, what may be most admirable of Gyruss is the crazy amount of sprites, for an 8-bit hardware machine at least, that it manages to juggle on-screen all at the same time. Granted, this comes with some flickering issues, but surprisingly minor, and without slowdown. The bosses are honestly a letdown at times, being somewhat small and not quite intimidating, but the strictures of the characterization were likely limited by the tube theme—which, in itself, is a graphical feast that mostly makes up for other nitpicky flaws. There is something very appropriate about a shoot-’em-up that strives to make the player feel as though they are shooting through space toward an ultimate destination. 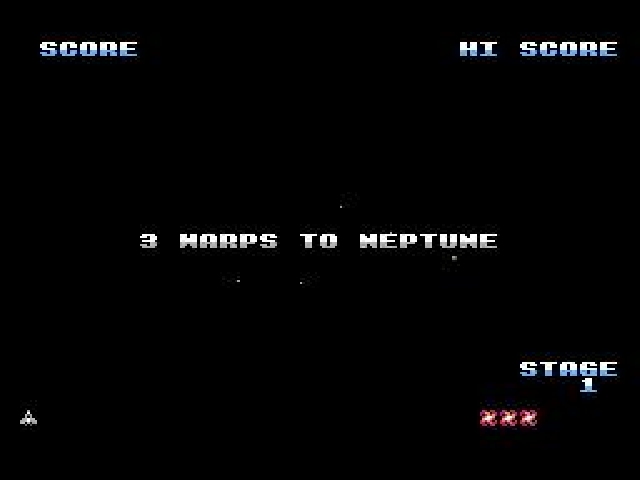 The soundtrack is great. Really, it is a Konami work, so the usual high quality can be expected, complete with the familiar Pause sound effect. The background tunes get away from the period rock of something like Base Wars or Teenage Mutant Ninja Turtles III: The Manhattan Project, and settle into a motif more apropo of the setting at hand, fast-paced enough to keep adequate adrenaline pumping, with skillful composition that will never distract by its badness.

If one were to look too closely, one would have to frown and conclude that Gyruss is not entirely innovative: The “space shooter” trope has been endlessly retread for decades, down to the spacey designs of pattern-flying enemy squadrons that dive-bomb at a double-firing protagonist against a shooting-starfield background effect. It is, almost exclusively, the tube element that makes this an original, creative entry in the NES canon of gaming.

The most critical of observers could also say that Konami did not seem to try as hard with this one; the level-by-level execution is fairly straightforward, even with some quirky variety at points like the level without enemies where the player only needs to dodge incoming objects. The ending consists of a modest animation and one line of text (note: to be fair, the version on the Famicom Disk System is longer and less stripped-down). However, to purely take on a gaming perspective, that of a fan of video games, that of a human being with a controller in hand ready to take on the villains of the galaxy, that of purely sitting down in seeking a fun way to pass the time, Gyruss deserves its rating of four stars out of five. The five-word review goes like this: This is a great game. 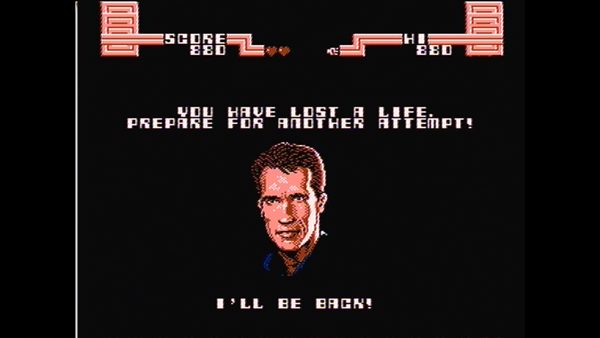