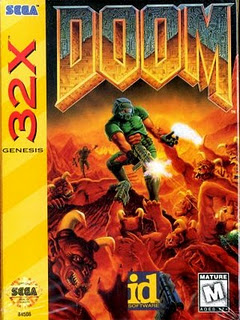 I will give it a shot and say it anyways, Doom for the 32x is the pick for this week. In fact, I have to write up another session of this series in order to make up for the one I missed last week. Well there is no better way to put it then to say AWESOME! This is what Doom has been and what Doom will always be, no matter what! This game got me hooked to FPS back in the early PC games, which made me addicted as hell! Having Doom on the 32x is really kewl for the day it was released that is(You can get the game online so easily now and play it with good old DOSBOX on your fancy super duper fast PCs and laptops). Anyways, this version of Doom is like any other version of Doom…except a little chopped up and with a bad soundtrack.

This version of Doom suffers from having less levels than the other versions. This is a big mistake and somehow I don’t understand why it would be ripped apart. Did they got lazy? was there something wrong with the port? The SNES version of DOOM is amazing but somehow Sega and the producers of the game fucked up the port that was coming out for an add-on that was supposed to be superior…..

[youtube]http://www.youtube.com/watch?v=vN3jedyHBpA[/youtube]
In the end, I say it once more, it’s Doom. You will get your classic addicting gameplay with malevolent monsters and freaks to take you back to hell….then again…aren’t you in hell already? Until next time!