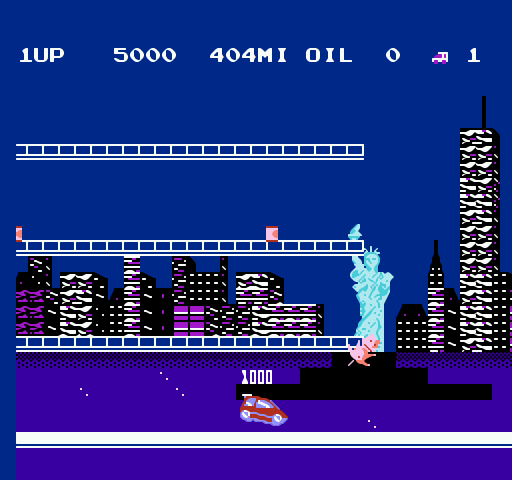 City Connection was a somewhat classic arcade game that debuted in 1985, offering players a fast-paced high-score challenge that demanded intense concentration and twitch-speed reflexes. In 1988, Jaleco published an 8-bit version for the Nintendo Entertainment System. Was the cartridge any better than the cabinet?

City Connection is a platforming puzzle game with a unique premise: The protagonist is off to see the sights that the world has to offer; however, rather than paint the town red, he wants to paint the streets white. This means that the goal is to just drive over every square inch of road that each city has to offer, completing a stage when every blank grid space has been marked in white. 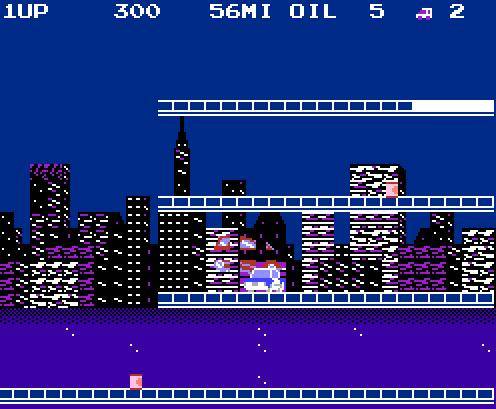 But rather than drive over one single road, presentation is given from a side view, with four tiers. This means that the controlled car must be constantly jumping up to higher levels, falling to lower ones, or hopping across gaps. The A button is used for jumping, as proper, while the directional pad corresponds with movement, of course.

However, the challenge arises in the fact that our mysterious driver does not explore these streets alone. There are always multiple police cars patrolling the byways, along with cats that just sit in the road and instantly take a life if struck. The player begins with three lives, and can earn extras when hitting 100,000 and 300,000 points.

To both foster bonus points and defend against cops, there are oil cans strewn throughout the stages. Picking them up adds them to an inventory, whereas the B button fires them ahead of the vehicle, striking law enforcement vehicles to render them harmless. If the player can stockpile oil cans without using them, 100 bonus points are awarded for each when the city is completed.

If the player stays on one of the tiers too long, metal spikes begin erupting out of the ground, just one, that will sit there until moving to a different level. The cats, the spikes may disappear if the player simply turns around and lets them go off-screen before returning to their spot; although unlike the felines, the spikes tend to appear much more aggressively.

Thus, the player ends up with a maze-completion type game in the vein of Pac-Man but with platforming mechanics drawn somewhere through the ages from Donkey Kong. This is an arcade-style game, with six stages that endlessly repeat, purely for the pleasure of seeking the highest score. Two players can try in alternating turns. 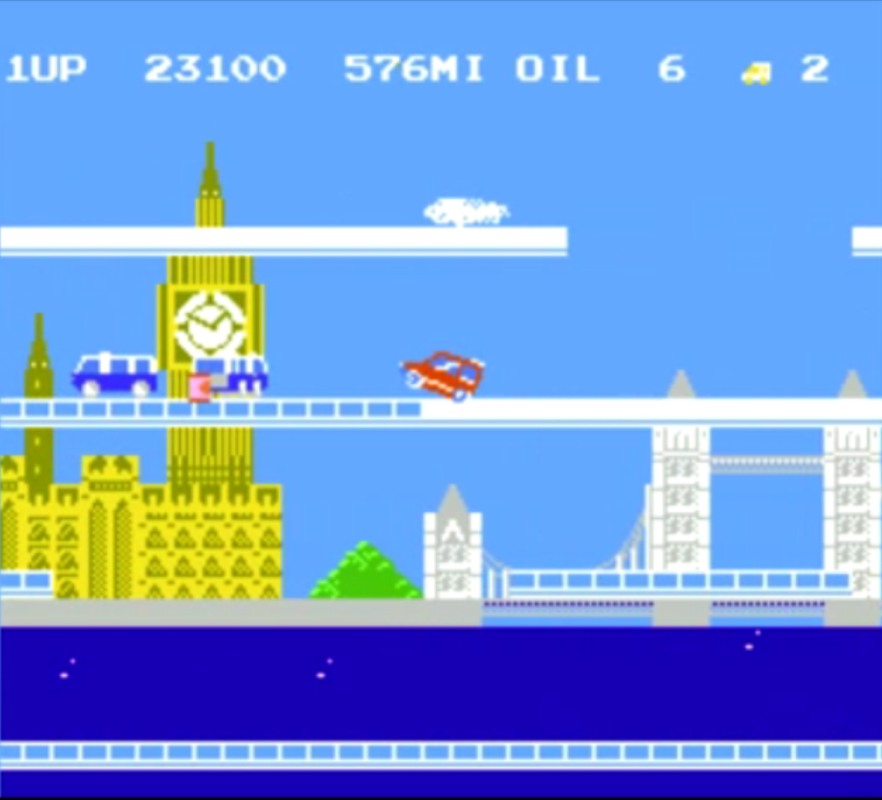 Oh, and there are balloons. They are worth bonus points, and grant a city-warp effect when three are collected. Magical warp balloons, yes. Even with those hexing helium semi-spheres, City Connection just poses too many cheap deaths in the player’s direction to really be any fun. This is a “challenge for challenge’s sake” sort of game, where only those who played it without other choice or in search of something utterly difficult and minimally rewarding would ever truly grow fond.

In this reviewer’s opinion, the visuals of City Connection on NES are the game’s highlight. The protagonist car has some nifty animation frames, having the policing vehicles appear differently in each city is a nice touch, and the background details for the cities themselves are wonderful, with recognizable sights like Big Ben in London and the Eiffel Tower in Paris, along with portraying the locations in differing times of day. There is even a faux parallax scrolling effect at work, whereby the background is scrolling by a little bit slower than the streets themselves. 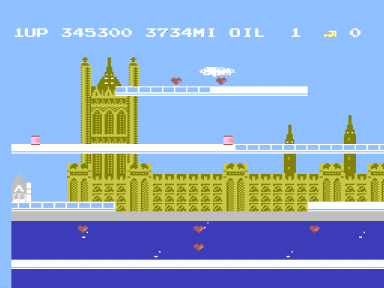 Then again, this game has some serious flickering problems, with many police vehicles constantly blinking in and out of existence, which can be a distracting nuisance for the eyes. Also, while the arcade original actually used colors to fill in the streets, all NES players get is a bland, tepid, boring, depressing stark white across every roadway. Bleh.

The sound effects are barely noticeable, and never more than a brief one-note blip across the player’s consciousness. The music, while presenting itself as a decent arrangement of three sound-channel instruments, feels somewhat uninspired and gets repetitive. Eh.

While arcade-style high-score games have their place, and within their own category have varying tiers of quality, many of them lost something in their porting to home consoles in the 8-bit era. 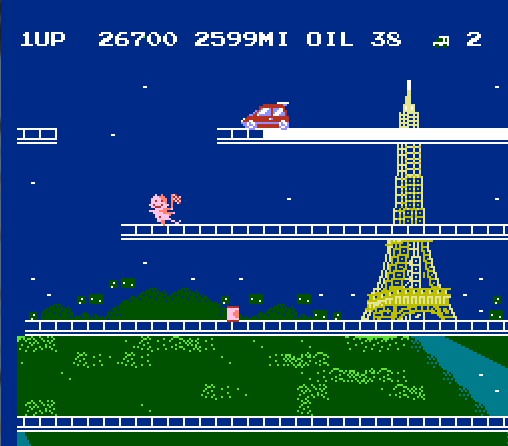 City Connection may have been one of them. Whatever the case may be, players are left with a subpar experience that, while not atrocious and certainly representing a game, raises a tough question: “If I had other NES titles to choose from, why would I play City Connection?”