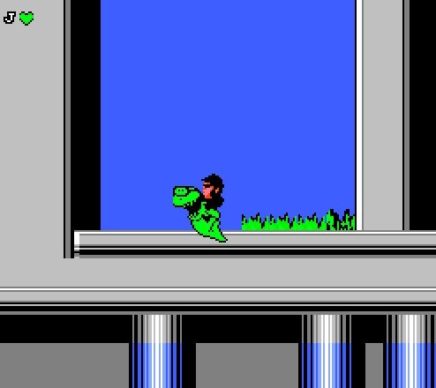 In 1999, developer Titus Software released a video game for theNintendo 64 console called Superman: The New Superman Adventures. More commonly referred to as simply Superman 64, the title gained widespread notoriety for being among the worst of all time. However, Titus had certainly been producing awful cartridges based on media licenses far before that; for example, Blues Brothers, which dropped in 1992 for the 8-bit Nintendo Entertainment System Console.

Blues Brothers, at first glance, is a fairly typical platformer. The directional pad moves the protagonist left and right, holding down the B button enables a faster movement speed ala Super Mario Bros, and the A button jumps. Two players can play simultaneously, although the implementation has its flaws, such as enabling one player to easily be left behind forever. Otherwise, the only other move is the option to crouch by pressing Down, and possibly crawling back and forth while doing so. 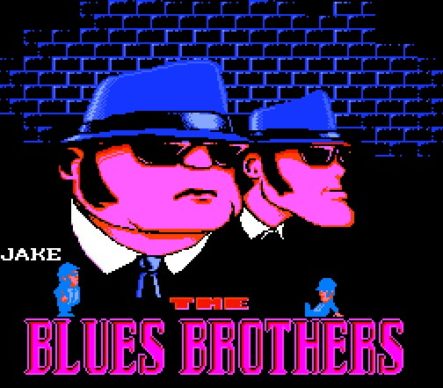 Based on the hit 1980 film of the same name starring John Belushi and Dan Akroyd, Blues Brothers gives the player the choice between playing as Jake or Elroy, although this does not affect gameplay beyond their appearance. The twelve-year gap between the movie release and the game release is interesting, to say the least, and one has to wonder if Titus was truly grasping for the cheapest licenses they could try to take advantage of.

This is a platformer, with the simple goal of reaching the end of each of the handful of levels. Enemies are usually to be dodged rather than defeated, with the exception of goggled sharks and dogs that can be temporarily rode upon, seemingly just for kicks. There are many traps, spikes, pitfalls, and other dangers. Even pausing is dangerous, since there is a delay, which is a spectacularly unusual element for any video game. 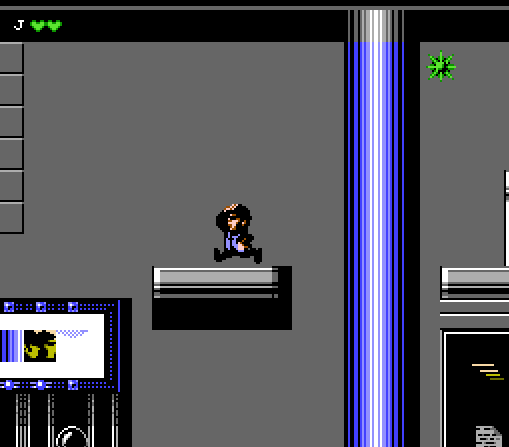 While the formula seems intact, and the game impressively scrolls across all directions across large levels full of different required movements and detailed aspects, the player will soon realize that this is no ordinary NES video game. While three hit points are offered with each life by default, with a couple extra lives to go afterward and a couple continues besides, even all those instances of accident forgiveness can hardly prepare the player for the soul-searing nightmare ahead.

To put it simply: Blues Brothers is a very challenging game. But to merely put it in such stale words, such simple terms like “extremely hard,” only dulls the true nightmare effect this cartridge provides. Blues Brothers on NES is a master class in awful license games, putting on a clinic of game design choices that artifically inflate both difficulty level and gameplay length through means of platforms the player can only spend a limited time on, invincible enemies, no means of attack, remarkable precision needed for jumps and other maneuvers, “trap” drops where you cannot see oncoming dangers, unclear destinations, slippery physics, and other notable faults. 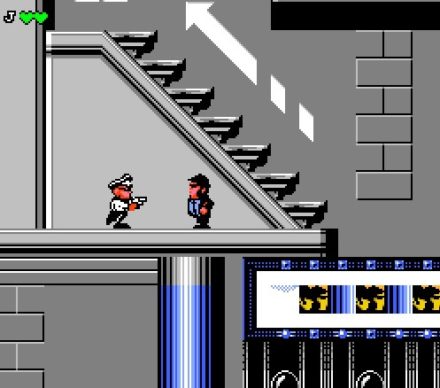 Blues Brothers may not be the worst NES game, and several nice quips could be uttered concerning its presentation, but the outright combination of patience for tedium and outstanding platforming skill required to complete it are astounding. Titus really flexed their bad-design muscles on this one, providing 8-bit gamers with something that might be even harder to enjoy than it is to complete.

Having said all that, the game does not look terrible. Yes, the color choices can be a bit strange, with the one-color animals and the way the protagonists’ coats often blend into the background, and maybe sometimes the tile-based haphazard sophomore-effort effect of the levels is overwhelming, but at least the pixels are usually placed with care and the entirety obviously took a lot of effort to produce. Actually, it might even be better-looking than Superman 64, if we are being completely honest.

The effects seem a little limp, achieving a cartoon-like absurdity at their best and an underplayed denouement for the most part. Then there is the music, which might be the best part of Blues Brothers on NES; appropriate, considering that music played a rather prominent role in the film. From the title screen track to the stage backgrounds, the crew at Titus shows off some skill in layering the hardware wave forms nicely, with enjoyable beats over pleasant melodies. The emulated drum kicks well, and it may be a shame that such simply good chip music had to accompany an otherwise crappy game.

Beyond the strangeness of riding a green goggles-wearing shark for a few seconds, the whole Blues Brothers experience feels stale and overdone. The game feels like the final project of a student tasked with producing a platform games; the levels crawl on endlessly with little self-consideration for the reasons why they proceed in the manner that they do, and completion of each feels so utterly arbitrary. The ending seems to echo this sentiment, with a big shrug from the developers as a single bland congratulations screen marks the finale to a real slog-through session. A platform game can feel utterly cobbled together but still be somewhat fun, like Alfred Chicken, and some license games managed to shine on NES. But not Blues Brothers. Blues Brothers is bad.